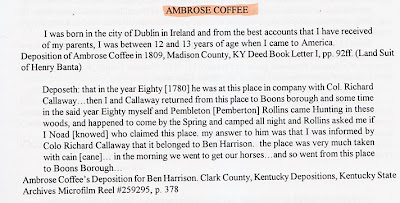 "I was born in the city of Dublin in Ireland and from the best accounts that I have received of my parents, I was between 12 and 13 years of age when I came to America."

Deposeth: that in the year Eighty (1780) he was at this place in company with Col. Richard Callaway... "then I and Callaway returned from this place to Boonsborough and some time in the said year Eighty myself and Pembleton (Pemberton) Rollins came hunting in these woods, and happened to come by the spring and camped all night and Rollins asked me if I noad (knowed) who claimed this place. My answer to him was that I was informed by Colo Richard Callaway that it belonged to Ben Harrison. The place was very much taken with cain (cane)... in the morning we went to get our horses... and so went from this place to Boonsborough...
Posted by Mitzi Swisher at 6:44 PM