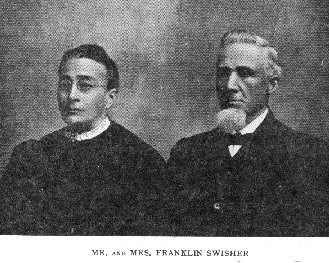 FRANKLIN SWISHER, (PICTURE) who has been a resident of Marion County since 1859, resides on his fine farm located in section 30, Tully township. He is one of the most highly respected, and prosperous agriculturists of the township. He was born near Vanlue, Amanda township, Hancock County, Ohio, November 1, 1842, and is a son of Thomas F. and Margaret (Plotner) Swisher.

Thomas F. Swisher was born in New Jersey and from that State came to Ohio, first locating in Franklin County. In Marion County he was married to Margaret Plotner, a daughter of George Plotner, who came from Pennsylvania to Marion County, Ohio, and became the owner of 320 acres of land in Scott township and 160 acres, in Tully township, besides other property. Mr. Swisher was a soldier in the Civil War. He enlisted from Upper Sandusky in the 55th Regiment, Ohio Vol. Inf., but after one year's service was discharged on account of disability resulting from an attack of typhoid fever. After leaving the army, he located in Tully township, Marion County, which was about 1864.

Eight children were born to the parents of our subject, namely: Mrs. Samantha Foutch, a resident of Iowa; Franklin; George, who enlisted in the army and died from the effects of a wound received in a skirmish; Mrs. Phoebe Sharrock,. deceased; William, a resident of Iowa; Mary, wife of William Jones, living in Scott township; Thomas, residing at Caledonia; and Mrs. Margaret Winemiller, who lives in Morrow County, Ohio..

Franklin Swisher was about 16 or 17 years old when he came to Tully township to live with his grandfather Plotner, who resided where Samuel Hill now lives. Returning to Hancock County he again came to this township in the fall of 1859 and lived with his uncle for some time, after. which he worked for two years on the Crissinger and other farms. Since 1859, with the exception of one year spent at Galion, he has been a resident of this township, and has always followed farming.

On December 28, 1861, Mr. Swisher was united in marriage. with Savilla Crissinger, who was born, in Crawford County, and is a daughter of David and Sarah (Phillips) Crissinger, who first settled in Crawford County, on coming to Ohio from Pennsylvania, and from there came to Tully township and bought the present farm of our subject, on which they spent the rest of their days. Mr. and Mrs. Swisher have had no children of their own, but have had at various times six children in the family, of whom three boys died quite young; two girls and a boy were reared to maturity as. follows: Ella M. Crissinger, a cousin of Mrs. Swisher, who became the wife of J. H. Pace, Nellie Sharrock, a niece, left an orphan at 12 years, who is now the wife of Henry Baldinger, of Tully township; and Homer M. Messenger, whom they took to raise when four years old, who is now a railway mail clerk between Cleveland and Cincinnati, Ohio--he served in an Ohio regiment during the Spanish American War and saw service in the Philippines. These children have been treated by Mr. and Mrs. Swisher as their own and have been in every way a credit to them.

Mr. Swisher is a Democrat in politics; his father was a Republican. He has served six years as an infirmary director-from 1893 to 1899, inclusive-was township trustee six or eight years and was township treasurer for three years. He is a member of the English Reform Church, of which he has been an elder for about 12 years.
Posted by Mitzi Swisher at 1:54 PM